Unlocking The Secrets of The Talk

What do you do when you’ve followed the instructions from Ending The Parent Teen Control Battle, delivered The Talk and much to your surprise, it worked; where do you go from there?Click To Tweet We’ll talk about this and a whole lot more on this week’s podcast, Unlocking The Secrets Of The Talk.


We have a 12-year-old son who does reasonably well in school and almost any place but at home.  As far as he’s concerned, all our rules, all our limits are completely unreasonable.  He fights and argues about everything.  After reading Ending the Parent-Teen Control Battle we realized that we were in a long-standing Control Battle.  We had The Talk and it pretty much turned things around; it was truly amazing.  Now we can feel ourselves starting to slip back into our old ways and we don’t want to lose the progress we’ve made.  We have two questions,


Cindy, I’m more than thrilled that you took the leap of faith and applied, The Talk, and of course, more importantly got great results, a son no longer fighting you every step of the way.

Let’s take a look at what makes The Talk so effective and then how to maintain your progress so that healthy behavior is normal for your new family.Click To Tweet

The Talk is designed to be something different from and do something very different from good parenting advice. The magic of The Talk comes from truly powerful ideas from the brilliant pioneers of family therapy and brief therapy.  These theoreticians realized that problems live in patterns of behavior.  For instance, a kid not doing their work and parents trying to get them to do their work. The problem lives in 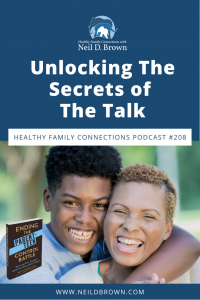 the pattern of behavior between the kid and their parents.  I studied with those amazing theoreticians and adapted their models to the families I’ve worked with over the years. These families all struggled with the problem they came to me with for a long time.  They’ve almost always gotten counseling, and often medication with limited if any good results. As you may well know by now, I call the patterns of behavior that the problem lives in, the Control Battle and once parents understand that and see what drives or contributes to the Control Battle and are ready to end it, they are ready for my tool which I call, The Talk.

Here are some of the reasons this powerful tool works:


Cindy, does all that make sense to you? I hope so, so now let me address your first question about things sliding back.  You applied The Talk somewhat on blind faith, that it would change things and low and behold it did.  It took things out of the old pattern and raised the bar for everyone.  Now as parents you became clear and committed and expressed complete confidence in your young teenager.


Cindy, when folks first come into my office, they aren’t doing well, and they aren’t feeling well about who they are and how they are.  Then after spending a little time getting to know them, I can see how they are suffering, and I can see or perhaps imagine how they would be if they were functioning up to their potential. In my mind, I see them at their best, doing great, feeling great. I’m not naïve either.  I see kids with ADHD, on the autism spectrum, diagnosed with ODD, bi-polar disorder, depression, sensory motor integration disorder, you name it and I’ll tell you that they can all do well. I’ve seen it. I’ve helped successfully facilitate it, and I’ve seen other professionals facilitate optimal family and youth performance.  But they can only do well when they’re not in a Control Battle.

But here’s the challenge, I can’t be the only one holding a healthy vision of this teen and these parents. They need to believe in themselves.  They need to hold a healthy vision of themselves and each other.  If they do, going forward and not back sliding won’t be a problem. Sure, teenagers get surly and need limits and support, but that’s just how it is.  But holding ourselves up to our potential and each other up to their potential is what healthy families do. It’s not always easy and it’s not always smooth. That’s not how life is.


What keeps parents from having and holding a healthy vision of themselves and their kids?  Parents virtually always have issues from their childhoods, from their families of origin. And commonly, those issues affect their self-esteem and behavior as adults and as parents.  These childhood issues can incline parents to take youth behavior too personally, be inconsistent in setting limits and maintaining standards, or being too rigid and not responsive to their youth’s needs, or hovering and micromanaging, or not taking care of themselves, their own mental health and their own needs. Of course, all parents have some issues that compromise or limit their parenting in some way.  That’s life.  But when those issues interfere in a parent’s ability to invite their teens’ best and lends itself to participating in a Control Battle, then self-awareness and a willingness to grow and envision a better way is critical. None of us will ever be perfect for every situation but knowing that and being willing and able to adjust along the way is what we all need.

So to keep from backsliding, you need to be aware of any personal issues that will interfere in having a positive vision of yourself and your family. Click To Tweet Personal counseling could be a good option to help with this.

Cindy, here is another thing to keep in mind.  You’ve been in a Control Battle based relationship for a long time and in a healthy pattern of family interaction for only a short time.  Your Control Battle relationship is familiar and your healthy relationship unfamiliar.  We’re more comfortable in our old worn-out shoes than our new ones, know what I mean?  So, you need to be vigilant and intentional in your new ways.  Without knowing your family dynamics I’ll offer that commonly you need to stay positive with your son.  Absolutely avoid letting earned privileges regress into give them, take them away, give them, take them away.  Then they’re consequences again.


If you see your son’s attitude has changed for the better, and he’s accepting your parental authority, you can give some privileges.  But discuss ahead of time with your son that it’s an experiment to see how he does with it.  Can he maintain his growth and his more responsible, healthy behavior when he has privileges?  As a 12-year-old, he’s going to need limits and structure so don’t open up the floodgates on privileges.  Go slow.  If he gets hostile because he thinks he should have more, well, hostile behavior is not the right way to express his frustration. So, privileges don’t come.

Let him know that you’d be happy to listen to his feelings when he can communicate them in a healthier, more mature way.Click To Tweet

So Parents, Therapists and folks who work with families, so much youth development is lost, and therapeutic input rendered ineffective due to Control Battles. Teens can benefit from counseling and get support, learn emotional management skills, improved executive functioning, improved self-esteem and benefit from many forms of therapy.  But when kids and parents are engaged in Control Battles, all that effort is chewed up and spit out, and all that time when kids could be investing in their development is instead spent avoiding and resisting.