If you’ve experienced behavioral challenges with your high school senior, after graduation is an important time to make some critical changes. 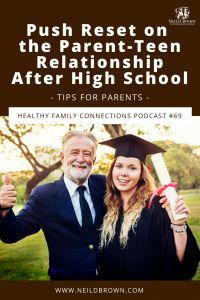 My son will be 18 next week. His father and I divorced about 5 years ago. During that time I have caught him several time smoking pot. He got in trouble for being out after curfew and had pot in car about a year ago. I took him to counseling and they enrolled him in a group and drug tested him for about 3 months. After that they told me they didn't think he needed any other help. The courts let him off because he went to this group. He was ok for a few months but now he is sneaking out and I am sure he is using pot again. Each time I talk to him about counseling he gets angry. He has anger issues and has put some holes in the wall before. I have talked to him about how I want to be a better parent and help him make better choices but nothing seems to help. He is a great kid. He graduated with honors and got complete scholarship to local community college. He has a good job that he likes. How do I get him help? Thank You

Hi Lyn and thanks for your question. Your son is successful at school and successful at work and you are pretty sure he smokes pot. The police stopped him after curfew, which isn’t criminal behavior, it’s an offense based on his status as a minor. He probably had a small amount of pot in his car, which is illegal, they dropped charges as long as he went to a group, which he did successfully. So it seems that on his own, he’s doing pretty well. Yes, he smokes marijuana, which a lot of young people do, yet it doesn’t seem to be interfering in his education and work. That’s something that could catch up with him and cause him problems if he uses it often, but right now, that may not be the thing to focus on.

Lyn, here’s what I think. I think your son is a very independent young man who is figuring out how to be successful in the world. He’s pushing some limits and making some mistakes, but he’s being successful. So while he is confident and independent and aggressive, you are nervous and concerned and wondering what to do about his anger problems and pot use. You're nervous and concerned and looking for professionals to help. His independence and quest to figure things out on his own are at odds and those two things. This is creating a control battle that is adding to his frustration and disrespect. This keeps you looking for solutions. Let’s look at some things. If your son was awarded a scholarship to his community college, either he accepted your help in applying or learned about it and got help from someone at school. So he is able to accept help, learn and grow. This is supported by the fact that he applied for and got a job, enjoys it and is successful at it.

How To Make The Transition From Teenager To Young Adult

Lyn, you and your son are entering a new era; he’s out of high school and entering community college and I’m guessing that you both are expecting that he is going to continue to live with you at home. Now is the time to make a shift in your relationship and get on a new and more successful path forward.

You and #teen are entering a new era. Now is the time to make a shift in your relationship and get on a new and more successful path forward.Click To Tweet

Here’s what I think you can do:

First and foremost, rather than you focusing on what’s wrong with your son, let’s focus on his independence and success and celebrate that. Make sure he knows how proud you are of him. Let him know that you want to push restart on your relationship now that he’s a young adult starting college.

This may be hard for you to do, but it’s part of you taking a more empowered position in your relationship with him: make it clear to him that given he is a young man now, that you expect him to be respectful in his behavior and communication with you, and that you will be able to support him as long as he can be respectful.

Let him know that he needs to fix the damage to the walls and explain it as putting the past behind and starting his young adulthood with a clean slate.

Have a conversation with your son about how you are going to work together while he is in college and how you can put the past behind you and enjoy his moving forward together.

What does he need from you? What do you need from him? Are you going to be stocking the refrigerator, cooking for him, doing laundry for him or is he expected to do some of that on his own. What about cleaning his space, his room, his bathroom, common areas? How about communication and letting you know what his schedule is and when he’ll be home? Are you okay with the hours he’ll keep and if he has friends over, what are the understandings about those issues? Are there some things he can do for you in return for your support of him?

Changing The Dynamic Of Your Relationship

Lyn, this may or may not be relevant to your situation, but the dynamic you are describing, of a fiercely independent teenager and a supportive yet concerned and worried parent is common in many immigrant families where a youth is adapting to the dominant culture and the parent, who is less familiar with it and less adaptable, struggles to establish healthy boundaries. What often happens is a youth rejects parental structure seeing the parents as not able to guide them in a relevant way and teens sometimes go haywire and sometimes adapt and apply themselves, but may be disrespectful to their parents and even reject that part of themselves.

The essential issue here is that for whatever reason, the parent feels and acts in a powerless or disempowered position. You say to your son that you “want to be a better parent”. I’m not sure what that means but I don’t think should worry that you aren’t a good enough parent. You do have a lot to offer and if there are some things you can’t offer, that’s fine, that’s true for all of us. You do deserve respect and you do deserve to be listened to.

Don’t worry that you aren’t a good enough parent. You do have a lot to offer and if there are some things you can’t offer, that’s fine, that’s true for all of us. You do deserve respect and you do deserve to be listened to.Click To Tweet

Yes, counseling would be great to address these issues, but only as family therapy with you and your son together, at least for starters. If you were going to try to convince your son to go to counseling, it should be explained as you and he going together to work out how best to work together now that he is a young adult. You could even make going to counseling together a condition of living at home, but right now it doesn’t sound like you have established that kind of accountability with your son. So if he doesn’t go, you should go on your own to learn how best to establish boundaries, take a more empowered position without engaging a control battle. Make sure that you go to a therapist very familiar with adolescents and young adults.

With respect to pot use and violence, you could tell him that you know he is going to make his own decisions about marijuana use, but that you will not allow it in or around the house, and you hope he has the good sense to keep it to very minimal use so that he keeps his head clear for learning and growing. Now violence in the home, even violence against property is abusive and illegal and you should remind him that you hope he’s outgrown that behavior, but at age 18 if there is any more violence, you will call the police and he can be charged with domestic violence. If that happens, he will need to take an anger management class as a condition of his probation.

Lyn if you and your son find a successful way forward, and I’m sure you will, even with a few bumps and bruises along the way, as he moves through his young adult years, and young adulthood is really the last stage of adolescence, you can expect that his behavior will even out and he will be more respectful towards you and appreciative of you.

Just as an aside; a message to therapists and counselors out there: While I know for many of you I’m preaching to the choir, please, if you are completing working with a teenager in a group or individual setting, please don’t tell a parent that they’re fine and don’t need anything more. Let them know that they did well in either group or individual therapy as the case may be, and what they specifically did well with, of course without breaching confidentiality, and that if there are other issues that need addressing, particularly in the home, please address those issues in family counseling, and if possible, make a good referral. That way we are empowering parents, not undermining them.

So listeners, our youth entering young adulthood is an important transition and one where they will necessarily be making many more decisions on their own and certainly not all of them will be good ones. But it is part of their journey. Our role is to keep faith in them hold our boundaries in positive ways and help them learn from their mistakes. When our teens graduate high school and particularly if certain behaviors were unacceptable as high school came to an end, the transition to post high school will benefit from pushing a virtual restart button, get out of control battles, establish healthy new standards and expectations and focus on the positives.