My Son Wields Silence as a Weapon. 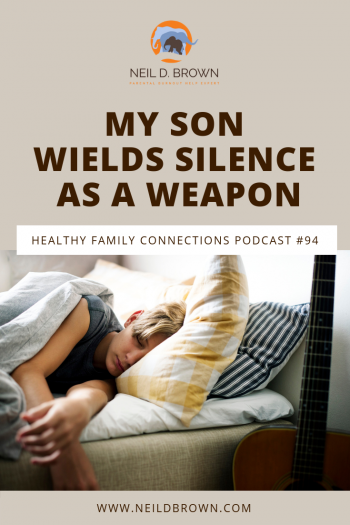 When your teenager has issues that they need to deal with, but they shut down when you raise them, you might be in a passive control battle. How should you deal with this?

What do you do to connect with a teenage son who chooses silence and seems to wield it as a weapon?

My son is 16 years old (a middle child with an 18 year old sister and a 13 year old brother).  He was diagnosed with GAD General anxiety disorder at age 6. He had terrible separation anxiety in kindergarten to the degree that he would try to jump out of a moving vehicle. It took the principal and 2 other teachers an hour to get him out of the car.  Also he would cry just thinking about dying and would need a parent to ask him math problems to get his brain "unstuck".  He overcame this with the help of therapy and excellent teachers; however, he seemed to learn to hide his feelings too well and to develop an exterior of cool.  As a result, as he has grown up, he has learned to use his silence as a weapon and a way to get out of talking about his inner thoughts and feelings.

He gets great grades, has good friends and misbehaves in normal age-appropriate risk taking kinds of ways.  We have a pretty good relationship and he will still participate in game nights and cookie decorating.  He has had a girlfriend (who we all adore) for the last 1.5 years, but I can see he uses his silence as a weapon with her as well.  When he is angry or insecure, he shuts down.  He has difficulty compromising or talking about issues that are bothering him.  I'm sure it is his anxiety in another form, but when I broach this topic, he becomes very defensive and says he just isn't a talker and he thinks talking about things is a waste of time.  He "should be allowed to be quiet" and we should "accept his personality".  He is 100% opposed to therapy.  I try to tell him that it will hurt his future relationships and job opportunities if he is unable to communicate his thoughts and feelings under duress, but he will not be swayed.

What do we do to help him want to express himself?

Hi Patti, thanks for your question. When you say he wields his silence as a weapon, you are describing a control battle and there are passive covert forms of control battles as well as more expressive overt control battles. You have one going on with your wonderful 16-year-old.  The good news, of course, is that your son is high functioning by most measures; he’s responsible, educationally successful and social.  But he’s using his shutting down as a weapon.

So the question of course is, a weapon against what threat?  What or who is he fighting?

Here’s my guess.  You are a very child-oriented family and when you realized you had a child with special needs, you provided a ton of resources to support him.  Extra support from educators, therapists, and everyone helped him deal.  And it worked, he succeeded.  Yet, he still has some learning and growing to do.  But at what point, do we stop treating him as a special needs kid.  At what point, is he responsible for expressing his feelings and needs--or not.  When does he get to decide if he wants to compromise or not?

Think about it; if he doesn’t compromise, he might not get any of what he wants.

That’s why we compromise; half a loaf is better than none, right? If we want support for our feelings, we need to share them. Click To TweetMy point is that life can be a pretty good teacher.  And life is a more credible teacher than our parents, whom you might remember, don’t know anything.

If you think of adolescence in stages, 16 is the beginning of late adolescence, the movement towards young adulthood.  Parents still set limits during this stage, but we want to let our older teenagers take more responsibility for their lives.  If they choose to shut down and go to their room rather than express their anger, that’s their problem.  They won’t get support that way.  If you said “no” to a privilege he wants and rather than discuss it and work out a compromise, he shuts down and chooses to suffer, that isn’t a weapon, just a self-destructive choice.  But if you chase him down and beg him to express his feelings, now he has some power from his shutting down.  If you choose for it not to affect you, then it isn’t a control battle.  If you let him brood or not without letting it be your concern, then he has nothing to resist, there is no inherent power in his choice. It’s just a choice and it leaves open the possibility that he could make a different choice.

You say that you see him doing this passive-aggressive behavior with his girlfriend, and you’re absolutely right, if he doesn’t outgrow the behavior, it will interfere in his future relationships.  But right now he’s a teenage boy, notorious for being unsophisticated in how they express their feelings; often passively or aggressively.  So what’s a parent to do?  End the control battle.  The passive control battle that’s going on needs to stop.

Recommendations to End the Control Battle

The more you want him to stop the behavior, get therapy for the behavior, change, improve, learn and grow in this area, the more he will cling to his passive-aggressive behavior.  He doesn’t want to hear, “You need therapy.  You aren’t okay.”  Even if the message is “We love you and want to support you, but we need to know your feelings to be able to meet your needs,” he’s still going to experience it as “You are telling me how I have to be, and I will resist that with all my might.”

There’s another element here worth mentioning.  You say it took over an hour for an elementary school principal and two teachers to get him out of the car and go to school. Patti, that was the beginning of empowering your son’s passive resistance.  The adults were working way too hard.  There was a team of adults trying to get your son to change his behavior and that is way too much power for a child.  Even at 5 or 6, he was responsible for his behavior and he needed to get that message.  It was his job to understand and manage his feelings and if you and the school all believed that, he would have believed it too.  Of course, I wasn’t there, but my guess is there has been a passive, covert control battle going on most of your son’s life.

Here’s what I recommend:

1.  In your mind, decide that he is a terrific kid with his own personality profile; his own strengths and weaknesses.  He may have been a special needs kid, but he isn’t any longer. He is just a good kid with some personal development ahead of him.  Congratulate yourselves for having successfully resourced and supported him in getting to this point and guess what, he isn’t perfect, but he has the right not to be perfect.

2.  Do not let yourself be controlled or affected by his passive aggressive behavior.  If he’s angry and shuts down, You can do a couple of things:

In this way Patti, you are out of the control battle and that is where you need to focus your efforts on.  Your son will have the opportunity to make his own choices about expressing his feelings or not expressing his feelings.  Since he has a positive identity and good relationships, there’s a good chance that over time, he’ll learn to comfortably open up and express himself.

So parents and professionals working with kids with anxiety, when we put more work into helping them than they put into themselves, we’ll often end up in a passive control battle that runs the risk of cementing negative behaviors and burning you out. Click To Tweet

So parents and professionals working with kids with anxiety, depression, or any other issue; when we put more work into helping them than they put into themselves, we’ll often end up in a passive, covert control battle that runs the risk of cementing negative behaviors and burning out parents and professionals.  What we can do is provide a safe, non-judgmental, fun and supportive environment with healthy limits. And then let kids come forward with their needs and their investment.  Trust them to take advantage of the opportunity; it’s the only thing that works.

As I mentioned last week, word of the Healthy Family Connections Podcast is growing and the number of listens and listeners each week has grown enormously.  But we only have 14 reviews.  So do me a huge favor would you, and post a brief review for me on iTunes.  It would mean a lot to me.