My Failure to Launch Son

A lot of parents these days are struggling with how to get their young adult children to move forward. This week, we’re hearing from Julie of Milwaukee, Wisconsin. 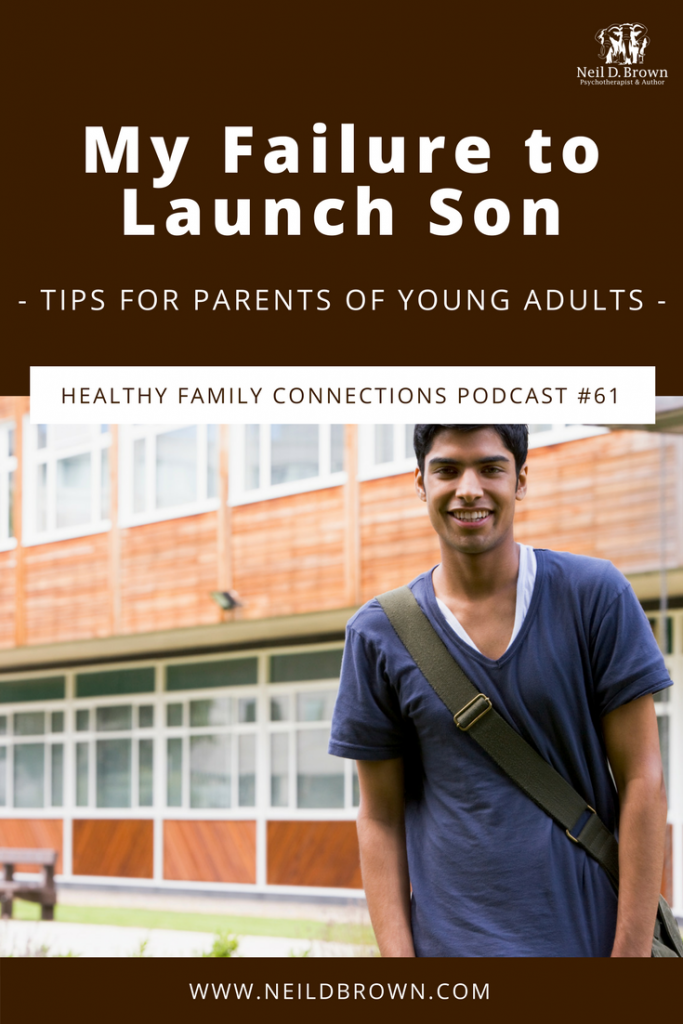 My 20 year old son is in "failure to launch" mode. I end up forcing everything on him, because he seems to have no ambition or belief in his abilities to learn or reach toward a goal. He was on ADHD meds throughout his school years, that did little for him, so he's no longer taking them. He's a nice kid, but has no real friends except his brother. He's never been bullied and people generally like him, but he is terrified to actually start a conversation or advocate for himself, so he rarely leaves the house and doesn't get into trouble. He struggles with social anxiety but is not depressed and his doctor put him on Zoloft. I thought the meds could help him be better equipped to take a class at the local tech college, which I forced him to take - Photography. This was a choice based on the fact it might be a baby step for a career that he's expressed interest in (a far-off almost unattainable goal of working for a company he enjoys as a consumer, but hasn't got any of the skills this company hires for). So far, he's flunking the class claiming it's too hard.

It appears to me that my options as a parent are getting down to forcing him in to the military or eventually kicking him out and changing the locks. He gets lots of encouragement to think about the future he really wants, but quickly goes in to avoidance mode if I talk longer than a minute. The one responsibility that he takes seriously is walking the neighbor's dog. He does it without nagging and is paid. He claims no interest in this as a career. He spends too much time playing video games and watching TV. I do charge him a small rent. How do I parent this young adult that doesn't want to grow up?

Thanks for your question Julie.

In some cultures, it’s normal, even desirable, for young adults to continue to live at home. This can, in part, be for economic reasons, caring for the elderly, or simply cultural that families stay connected in this way. If young adults are continuing their education or are gainfully employed, and are continuing to grow and mature socially and emotionally, and contribute to the household there is nothing at all wrong with it.

But that’s not what you’re describing and right now there certainly are a lot of young adults not moving on productively in their lives and getting stuck in their bedrooms.

For many of these young people, substance abuse is part of the mix, although I hear that’s not the case for your son. Additionally video games, surfing the net, and television are great at keeping things stuck.

Often these young people have serious issues including autism spectrum disorder, social anxiety, depression, and even schizophrenia or bipolar disorder. So, we’re talking about situations where YA’s living at home are not growing socially, emotionally, educationally or vocationally.

When this happens, what’s a parent to do?

Well first of all, this doesn’t happen over night. This is a situation that evolves and it usually evolves with parents trying to help a seemingly helpless teenager or YA without the full investment from the teen or YA in helping themselves. In the many families I’ve worked with in these situations, there is virtually always a Control Battle between the YA and their parents where the parents are trying to help the YA move forward, take even small steps on their own behalf, and the YA is resisting these attempts.

In these situations, the YA’s become increasingly dysfunctional and parents become increasingly exasperated and burned out, often resorting to threats of kicking the YA out. It’s common that the YA is abusive towards the parent, but the parent rationalizes it as a symptom of their problem, and don’t set limits with it. In fact, setting limits has gone by the wayside entirely. Not always but commonly.

When we support our YA children in moving forward, pay for education that they take seriously, or have them at home while they get their economic feet under them, and they are respectful housemates, no worries. When they are stuck and we support them, we are supporting them in staying stuck, and that is enabling behavior.

When teens are stuck and parents support them, they are supporting their teen in staying stuck, and that is enabling behavior.Click To Tweet

So Julie, you are in a control battle with your son. You are enabling him and he is staying quite stuck, believing that a photography class is too hard for him. It sounds like he thinks life is too hard for him, and if he continues to believe that, it certainly will be. Here is what we’re going to do.

You cannot push or force your son to do anything. But you can be a positive and empowered parent willing to provide the structure and support your son needs.

I don’t need to convince you that what’s going on is unhealthy so, to move forward you need a vision of health, a vision of your son getting the help he needs, and going forward in a healthy way. Your son is only 20 years old, which is still adolescence, so he has time to learn, grow and mature.

First and foremost, you have to change your attitude from one of fighting with your son, and trying to get him to do things, and then becoming exasperated when he doesn’t follow your guidance. You are going to get 100% clear that your son needs to and will move forward and make progress in his life and that you are not going to enable him.

You say he’s a 20 year old nice kid who would like to work for a company he enjoys as a consumer. Well, there we are, he’s a nice kid with goals and presumably he has anxiety, maybe ADHD. Even though you say he isn’t depressed, he most likely is given low self-esteem, lack of friends, and high amount of screen time. In any case, he’s a nice kid with social emotional issues and you are going to help him move forward.

He and you are going to need therapy to help your son move forward. You didn’t mention that you and your son have gone for therapy but have tried medication throughout his school years that didn’t help, and now his doctor is trying Zoloft to help. Medication alone does not solve developmental problems. The right medication at the right time can help a person address their issues. Make an appointment and go see a therapist who specializes with families with young adults either together or on your own. Let your therapist help you find the appropriate resources in your town for your son. It sounds like he’s a good candidate for an intensive outpatient program where older adolescents, and age 20 is still an adolescent, get intensive therapy several days a week and work in groups and that way young people help each other.

Medication alone does not solve developmental problems. The right medication at the right time can help a person address their issues.Click To Tweet

In this conversation you’ll explain:

I’ll role play how you might talk with your son, whom I’ll call Sean:

"Sean I need for us to have an important conversation and do not leave until we are completely done.

As you know I’m unhappy with how things are going with you and with us. I keep pushing to get you to do things and you keep resisting. You not attempting things and me pushing you is not getting us anyplace and is not helping you to move forward. Things need to change. You need a plan for moving forward in your life and right now you do not have one.

We have an appointment to see a therapist together and we will explain the situation and see what she recommends for you in terms of therapy. One possibility is an intensive day treatment program where you go to the program every day with other young people experiencing similar issues. But, we’ll see what is recommended.

In the meantime I expect you to get up at a reasonable hour and put in several hours of work around the house every day. I know you are afraid of going out and meeting people, but you can certainly do laundry and learn how to cook and do yard work.

Once again I apologize for not having high standards for you in the past, because you are capable of high standards; you are an excellent young man and you deserve a mother who believes in you and expects your best. When you start showing up with a positive attitude ready to work on yourself and contribute to our home then we can talk about some privileges returning."

Julie, if you can shift out of frustrated and disempowered and take an empowered and positive leadership position, your son can get the help he really needs and you will feel a heck of a lot better as well.

So parents, let’s all remember that when we believe in our teenagers and young adults, they can learn, grow and develop their potential. Even young people with issues will learn how to understand and manage their issues as they grow into themselves.

When you see a young person giving up on themselves, don’t join them. Remind yourself first, and then them, that they are fabulous, and then expect their best and that’s often the only way we’ll get it.

When you see a young person giving up on themselves, don’t join them. Remind yourself first, and then them, that they are fabulous, and then expect their best and that’s often the only way we’ll get it.Click To Tweet

Thanks for tuning in today and special thanks to Julie for her question.

Have you read my book, Ending the Parent-Teen Control Battle? I have a free gift for you!

Simply click this link to go to the publisher website. Once you're there, click Free Accessories where you'll find a downloadable chapter titled, "For Teens Only."

One parent told me that after his daughter read that chapter, things in their family completely turned around!

And remember, take care of yourselves; you need it, you deserve it, you’re worth it. Bye for now.