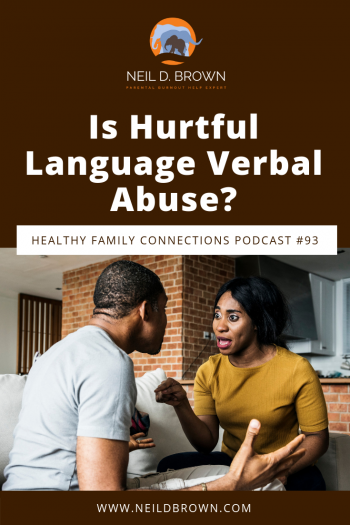 If your partner is critical towards you and gets angry when you bring it up, is it verbal abuse?

This week we’re answering a question from Diane of Huntsville Alabama.

I listen to and enjoy your podcast every week and appreciate your perspective and sage advice.  But I think you missed the main point in this week’s podcast.  Angie’s description of her husband’s behavior makes it clear that he is verbally abusive to her.  If we don’t call out verbal abuse, aren’t we enabling it?  I was in a verbally abusive relationship for several years, and it wasn’t until I read the book, The Verbally Abusive Relationship that I learned what was going on.  When I realized I was being verbally abused, I was able to end the relationship and I’m so much happier now.  Why didn’t you call out verbal abuse?

Thanks Diane, you are raising an important issue.  When do we use the word “abuse” to describe what is going on in a relationship?

Verbal Abuse and the Two Types of Power

In her acclaimed book The Verbally Abusive Relationship, Patricia Evans describes the use of two types of power in relationships, power over and personal power.  Power over implies dominance and control over another person.  Personal power, on the other hand, implies personal confidence that allows a person to be vulnerable and collaborative in a relationship.  It is caring about what the other person wants and needs in addition to what they want and need.

In Patricia Evans’ book, the verbal abuser is always the man and the abuser’s partner or victim, is always the woman.  Ms. Evans acknowledges that women can be verbal abusers as well, but with men it is more common and there are nuanced differences in how it manifests in men and women. In her work, she focused on the male abuser and female partner dynamic.  In my psychotherapy practice, I commonly see it both ways and of course, I see abusive dynamics in gay and lesbian relationships as well.

Patricia Evans defines verbal abuse as:  “Words that attack or injure, that cause one to believe the false, or that speak falsely of one. Verbal abuse constitutes psychological violence.”

What happens if your partner calls you a name and judges your motives and you simply say, “I see you’re upset and I’m happy to hear what you are upset about.  But I don’t accept name calling and if you want to know my motives, you need to ask because your assumptions are wrong.”  In this case, you aren’t allowing those words to have power over you.

What if instead you fight back and call them names and make judgments about their character?  What happens then?  Are you an abuser, are you both abusers?

These are difficult questions and so I’ve tried to bring some perspective on the varying circumstances here. And before we go any further, no, we should not be using derogatory words toward our partners, period. We do need to discuss what to call it when it happens, and what to call it when a partner is not responding thoughtfully to your emotional needs.

Whether or not someone feels hurt or abused by their partner’s hurtful words or actions has to do with several things:

Some cultures use harsher language and when that’s the case, people are a lot less likely to take what’s being said personally.  Also, in some cultures, people expect to get their emotional needs met by their spouse and in other cultures, it's not expected.  Still, harsh and derogatory language even in a culture that supports it can be hurtful and destructive, but perhaps not as much as in a culture where it isn’t accepted.

Some people are simply more sensitive than others, so any off the cuff remarks or loud expressions of emotion could be construed or experienced hurtfully or felt like abuse.

Some people have developed strong healthy self-esteem and have learned not to take what others say or do personally and perhaps can even maintain compassion for others while being talked at derogatorily.  As an example, think of an upset child who screams “I hate you” when their parent sets a limit and the parent is able to acknowledge and validate their disappointment without taking their child’s words personally.  It is certainly harder with your partner, but the same concept applies.  They are expressing their feelings inappropriately and hurtfully, but it’s generated by their feelings and isn’t a statement about the partner being yelled at.

Length of time the hurtful verbal behavior has been going on:

Sometimes the hurtful verbal behavior starts off slowly and over time it becomes the norm.  This can lead to what is often called frog in the pot syndrome.  It is said that if you put a frog in a pot of boiling water, it will jump right out.  But if you were to put the same frog in a pot of cold water and gradually bring it to a boil, the frog won’t notice the change and will boil to death.  You see the metaphor here, after a long time in a gradually increasingly destructive relationship, a person will wear down and lose their sense of self-esteem and even their sense of reality, often thinking they deserve the hostile behavior or they are causing it.  Had the relationship started off that way, they would have never stayed in it.

The intent of the person using the destructive language:

Often people using hurtful or destructive language have not learned to manage their emotions or learned to communicate their emotions in a positive way.  They never want to be hurtful, it’s just that that’s what they know. And then there are those individuals who are similarly underdeveloped in the area of emotional communication, but also have the desire to hurt others.  As Patricia Evans describes it, they use their power over others, but they are a step further and they enjoy it when they hurt others or win at their expense. That is the only way they believe they can survive, and they see the world in win/lose terms. They think the way to win is to demonstrate the ability to hurt others and they do their best to do just that.  They bully and they don’t care or have empathy for the people they’ve hurt. In other words, they are a very immature person with too much power.

You can see that I’m somewhat reluctant to use the term abuse and particularly the term abuser. It’s a static term that characterizes someone as having only this characteristic and not being capable of changing or growing.Click To Tweet  In a sense, it’s name calling a name caller.  I’d rather talk about the behavior in specific terms than to label the person doing it.

And yet Diane, I’ve referred many, many clients to Patricia Evans’ books over the years because simply seeing it in black and white, seeing the behavior, the syndrome, and having a name for it can be validating to someone experiencing it, just as it was validating and eye opening for you.  And Ms. Evans’ suggestions for dealing with abusive behavior are excellent.

As I talked about last week, we don’t want to accept derogatory language or behavior and we do want to be in a relationship where as a couple and as individuals we learn and grow.

As a therapist, whether or not we label the behavior as abusive or hurtful, or anything else, depends on what will work best.  In one case you could call the behavior hurtful, and the response could be, “get over it.  There’s lots of hurtful stuff that goes on out there.  Toughen up!!”

You could call it abusive and the person could say, “Oh great, I earn all the money, bring it home to you, I don’t get drunk or have sex with other woman, and I’m abusive?”

So whatever we call it- abuse or hurtful behavior, we want to be in relationships where our feelings and needs are valued, and we can talk about problems and difficult feelings. Click To Tweet That often requires work on both their part.  So let’s all do our work, since we can’t do our partner’s work for them.  At the end of the day, if you don’t have a partner willing to engage learning and growing with you, you just might want to do what Diane did, and leave the relationship.  On the other hand you could be surprised and find out that if you stand up for yourself, and you do it in a positive way, not only does your partner accept you and your personally empowered position, everyone else does too.

Word of the Healthy Family Connections Podcast is growing and the number of listens and listeners each week has grown enormously. Thank you for that! Although, can I ask a favor? The last iTunes review was last summer and it would mean a lot to me if you can leave me a brief review.