Are you supported, challenged, and growing in your job, or are you struggling to hold on while your mental health is in decline?

Working parents often have more conversations and interactions with the people at work than with their friends and families, even their partners. It’s important for us to realize that the culture of the work environment is every bit as important to mental health as the home environment. 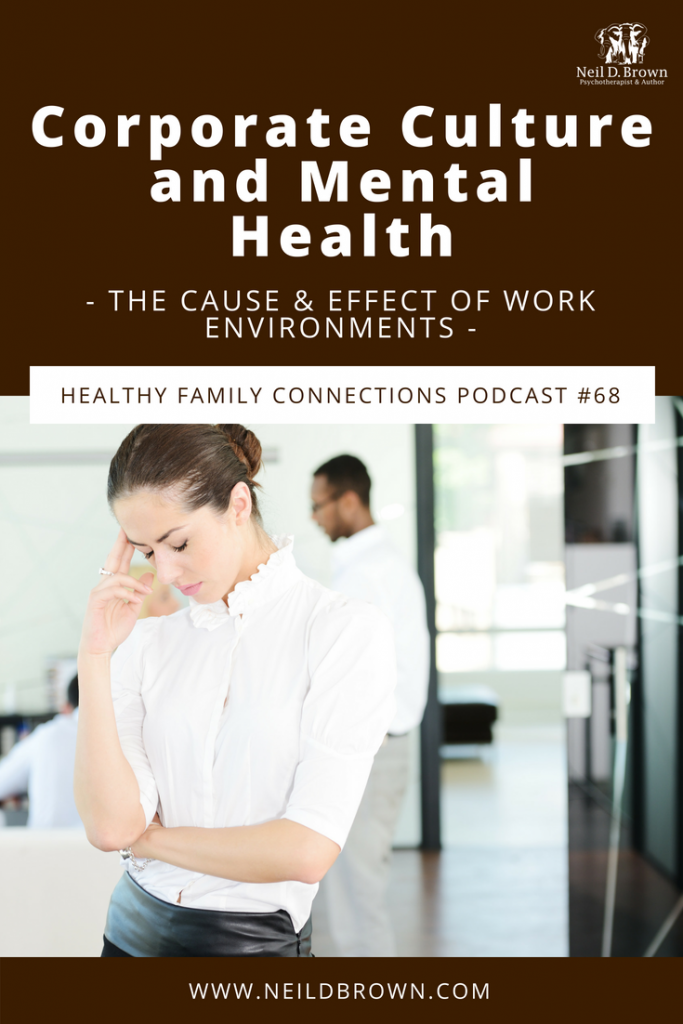 This week I’m going to contrast two different clients I’ve worked with who worked in very different workplace cultures, both are highly competent professionals. One client, I’ll call him Jeff, works on a very supportive team in a large corporation. This client has had very low self-esteem and self-destructive personal habits.

The other client worked in what became a very destructive company culture and she entered that environment with high self-esteem and healthy personal habits. I’ll call her Angela.

Here’s what happened in both situations, let’s start with Jeff, a very talented, creative, guy who grew up in a family of chronic criticism, and violence. Jeff didn’t feel worthy of love or support and realized very young, that to survive he was going to need a good education and a good job. He figured if he had those things, he would be relatively safe and secure in life even though he didn’t see himself as particularly talented. He married a woman who pretty much called the shots in their life together, and for the most part, that was okay with him since he didn’t know his own needs or wants very well anyway. Tragically, Jeff’s wife died after learning that she had a late stage cancer and Jeff was left with two boys, 13 and 14 to raise and support.

Initially, therapy focused on Jeff’s grief and sense of overwhelm with responsibilities at home and at work. Over time, it became clear that not only was Jeff dealing with grief and the new challenges he was facing in life, but with his own sense of personal unworthiness and inadequacy. He knew he needed to work to support himself and the boys, but he didn’t feel he could be productive at work and pull his weight; he was having a hard time focusing and both boys presented significant challenges.

Jeff’s supervisor was just amazing. He told Jeff if he needed to take a medical leave, his position would be there for him when he got back and that if he wanted to keep working, that he could take all the time he needed for himself and the boys. They reviewed his workload and relieved him of anything that could be easily delegated out and put him on some projects that Jeff had specific skill and interest in, with no urgent timelines. Jeff was in disbelief about his supervisor’s support. He thought he’d wake up and learn he had been let go. He also worried that his boss would get in trouble for supporting him given he was as unproductive as he was, or that his boss would get transferred and whomever took his position would fire him.

Jeff’s supervisor reassured him that he was in great standing with the company. And, that his name was prominent on several important projects, his reviews were stellar, and that he’s a good investment for the company. Also, the supervisor was clear that he cared about Jeff at a personal level and that many other’s in the company did too; that he was known as someone who would help anyone who needed help and was sought after to be on many teams.

Therapy helped Jeff deal with his grief and his parenting, but I was also able to utilize the support he was receiving at work to help him realize who he really is; a wonderful, likeable, loveable, talented individual who deserves happiness and success. He could give up the idea that he just needed to hide out personally and get by, and he could adopt the notion that he is competent, capable and worthy and has great leadership skills. Given the challenging circumstances Jeff was facing, this work wasn’t quick and it wasn’t easy. But over time, Jeff blossomed. When the time was right, Jeff’s supervisor brought Jeff’s main project into organizational focus where it was recognized as a great company opportunity and was well resourced.

In this case, Jeff’s participation in a healthy organization was key to his opportunity to heal the shame and trauma he experienced as a child, and achieve self-respect and happiness at a level that was previously unavailable to him.

Let’s contrast Jeff’s experience with Angela’s. Angela grew up in a large healthy family, not perfect by any means, but she and her six siblings were loved and supported. With that many kids, her parents kept order by having strict routines and expectations and that worked out pretty well. Angela was smart and loved learning and school and participated in school sports and activities when the opportunities arose. Angela had a good attitude towards herself and life. She enjoyed and was good at most things she did. Angela was a good team member but for the most part, she preferred to have only a few friends. She enjoyed her books, activities and homework, and wasn’t a social butterfly. She had adopted the family expectation that you follow the rules, do your best, and things work out just fine. Angela was happily married with a 12 year old son and a 9 year old daughter.

She came to see me because she was experiencing anxiety and depression. She reported that she was being irritable at home and was getting negative feedback at work. Some colleagues at work were apparently complaining about her to the head of her department. She wondered if there was something wrong with her that hadn’t shown up previously in her life.

After reviewing Angela’s life story and seeing it in pretty normal positive terms, and the healthy elements in her life, good marriage, friends, regular exercise, etc. we took a look at what was going on at work. Angela is a scientist who worked in the environmental health and safety department at work and was responsible of knowing best practices for handling all the chemical and biological material her company was experimenting with and developing. She reported to the VP in charge of her department but interfaced regularly with Directors in other departments and supported them in utilizing the necessary protocols. She had done well in her position and the company had received increasingly good evaluations from regulatory agencies largely based on her skill and effort.

About 18 months prior to my seeing her, a new CEO took the corporate reigns and his approach was far more laissez-faire and he was far less concerned about what the regulatory agencies cared about and the labs took greater and greater advantage of the lack of oversight. Needless to say, this was concerning to Angela who had spent years getting the company to implement and uphold standards that would protect individuals as well as the company. Now when she went to the Directors, they would simply tell her that their methods were plenty safe and she should quit trying to control them, after-all, she wasn’t their boss. She would try to discuss things from a professional and scientific point of view, but that just seemed to be interpreted as arrogance.

The VP of her department was new to the company and began to see Angela as someone who lacked interpersonal and relationship skills and coached her to build more collegial relationships with her interfaces. Angela did try, but the problem was not her relationship skills, or her professional skills. The problem was that she was being asked to be responsible for a standard with no organizational support or commitment for her role or the standard. Even the increase in regulatory breaches weren’t enough to open the company’s eyes. They simply let the legal department negotiate with the agencies; change timelines, get wavers, and make and break promises.

In the mean time, Angela was being told that she wasn’t a good fit for the company. This was so new to Angela’s experience, that she couldn’t see what was going on. She had always operated on the basic principle that, if you’re responsible, competent and reasonable, things would work out. But no matter what she did, things were not working out. I needed to help Angela realize that this was not about her competence, or her ability to build relationships as evidenced by her personal life and her history with the company prior to the new leadership. Not only were the chemicals in the labs toxic, but the organization had become for her, a toxic work environment, and there was nothing wrong with her that a new job couldn’t cure.

Angela had always been a loyal person and cared about the company and the many people coming into contact with substances that could hurt them, if not immediately, certainly down the road.

So, with sadness yet a better understanding that sometimes being both good and right isn’t enough, Angela decided to move on and was quickly snatched up by a company that was thrilled to have someone with her knowledge and experience.

Sometimes being both good and right isn’t enough.Click To Tweet

In this case, we have an example of an individual who was a well-balanced, healthy person whose mental health and overall functioning went into decline, due to organizational dysfunction.

What Can We Learn From This?

So listeners, there are several important messages we can get from these two cases.

1. Company culture matters. Working in a dysfunctional work environment can profoundly result in a negative impact to your mental health just the same as living in an abusive personal relationship can. Conversely, working in a healthy, empowering work environment, can help and challenge us to learn and grow ourselves. And what’s interesting is that healthy organizational culture is good for the employees, good for productivity and ultimately, the company’s bottom line.

Healthy organizational culture is good for the employees, good for productivity and ultimately, good for the company’s bottom line.Click To Tweet

2. Your mental health matters. If you’re working in an unhealthy environment, one where expectations are high and support is low, at the very leas,t realize that it’s not you and get personal and professional support. When possible, bring the challenges you are dealing with into the open so that there can be a dialogue and the possibility of change. And finally, if that isn’t possible, believe in yourself enough to know that you can move on.