Sometimes, when our children or teenagers do something wrong, we’ll require an apology. But sometimes, the apology is actually the least of our worries.

Today we’re answering a question from Marie. She writes: 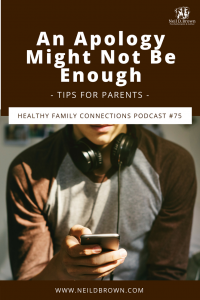 My 19 year old son is in college but lives with me in the summer (dad is not in the picture). A couple of family friends were at our house the other night and we all decided to play a card game. One of them noticed my son was cheating in the game and mentioned it. My son flew off the handle, started throwing cards around, and yelled at the relative. Then he yelled at me and said, speaking of himself, "I never should have allowed [the family friend] in my house!" I told my son that it was not his house; it is my house because I make the payment, and I can allow anyone in the house that I want to be present. My son then told a lie about me to the family friends. I later told my son he needed to apologize, but he has not. My son then sent me several rude text messages. I replied and told him that anger could ruin his future career, relationships, and life, and for that reason, he needs to develop strategies and skills to deal with it, and that I would help him do that. I reached out to try to talk the situation out with my son and he refused. I have suspended his cell phone as a consequence. This happened several days ago and we haven't spoken since. I am concerned that my son will repeat this behavior, which I believe is entirely unacceptable (not to mention embarrassing). I also have a younger son who was not present during the incident. Please advise what next steps I should take.

Thanks for your question Marie. Yes, I can understand that you would be concerned that your son will repeat the behavior that is unacceptable and embarrassing. But it’s more than that. Let’s think about it! Why would a 19-year-old cheat at a friendly card game with family friends? Why would he blow up when caught? Why would he think the family home is his domain? So Marie, I’m thinking this is more than an event, it is a significant problem in your son’s development and it’s more than just anger management. It’s a significant social, emotional and moral development issue.

Right now on the basis of that one story and the questions it invites, your son is seriously underdeveloped in these areas and he could easily be at risk for having, as you pointed out, life-long problems. In fact he could be at risk of having a Personality Disorder. Let me explain what I mean by that. A personality disorder is when an individual’s behaviors are pretty darn far off of normal. An individual with a Personality Disorder goes to their usual pattern of behavior to deal with stressful situations rather than using values, empathy for others, and more mature social-emotional skills. There are several different forms that Personality Disorders take, some quite active and some more passive, and there can be different degrees of how disordered a person can be, but the bottom line is that they have rigid unhealthy behavior patterns that get in the way of healthy social behavior.

Marie, you tell the story of this one event, but if your son was doing fine until this day, I’d say bring him to a neurologist and see if he has a tumor. But I don’t think that’s the case. It sounds like he’s been demonstrating anger inappropriately for a long time and this event represents things coming to a head.

In the event you described, you got into an argument with your son when he exploded. You told him it’s your house and why and later told him he needs to apologize and he refused and sent rude text messages. Then you turned off his phone service. The problem with all this is, rather than your son getting the message you are trying to send, that he has some critical issues to deal with, that you care about him and want to help him, it’s basically a fight where you are trying to get your son to change his behavior, and he is resisting your efforts, and what do we call that? We call it a Control Battle and Control Battles interfere with change, nothing changes when parents and kids are in Control Battles. With the intensity of his behavior, you may have been in a Control Battle for a very long time.

You asked about next steps, so let’s see if we can figure something out for you that will be outside of the Control Battle paradigm, and still address the issues productively and see if we can help your son get on a path towards healthy personal growth and development.

In our favor is your son’s age of 19. He’s still a teenager and has a few years of development ahead of him and he’s still dependent on you financially and emotionally; even thought he acts hostilely.

Marie, your son cheated because he couldn’t stand to lose. That was more than his ego could take. When he got found out, he made it the fault of the people who were there. I’d say there is a pretty fragile ego or injured self-esteem underneath the anti-social behavior. So aggressively confronting him will only invite more resistance. On the other hand, you’ll have to be forceful, empowered, and clear about the issues to get any traction in the face of his aggressive behavior.

Here are some ideas for next steps.

I’m not sure to what level you support him and I’m not sure what privileges he has. Do you give him spending money or use of a car? I’m also not sure what other ways his poor development manifests. Are there substance abuse issues, does he bully his younger brother?

What are your expectations of him? Does he have responsibilities in the home; clean up after himself, yard work, have a job, be home by midnight?

Are there expectations about how he treats you and talks with his brother?

What are his good qualities, his interests?

I’m going to have to make some of these things up to show you how to take a first step forward with him, but you’ll get the idea and can revise this to be relevant to your son.

I suggest you keep the phone service off and eliminate any other giving of things to him, such as car use, recreational money, or use of your credit card etc.

Write him a note that goes something like this, and I’ll call your son Mike.

Mike, the way you behaved when our friends were over is very troubling not just to me because of the hurtfulness of your behavior, but for what it tells me, and should tell you, about you.

For some reason, you needed to cheat at a friendly card game, blame others when they saw it, and then be violent and hostile. What the heck is that about?

If we win or lose at a friendly card game, who cares? It shouldn’t be you. You’re a terrific, talented college kid with a future full of opportunity and success waiting for him. You’re a talented athlete, good student, easy at making friends. Yet, you somehow feel the need to fight and win without regard for the situation, the rules, or others’ feelings. That’s not okay and it’s not the you I know you can be. That kind of behavior is not worthy of you and certainly not worthy of your best self. I need you to commit to being your best self and at age 19, that means being open to learning, growing, and improving. Going to college isn’t just about learning subjects, it’s for learning about yourself, and learning about life; it’s about growing and maturing.

I told you before that I needed an apology, and I do, but not just an apology of words. I need an apology from you that acknowledges that you have issues that need to be addressed and that you intend to address them. And then I would like to have a discussion with you about a plan for doing the learning and growing so vital to your future.

And Mike, while we’re on the subject of apologies, I owe you one as well. I’ve been fighting and arguing with you and in my attempts to get you to behave, I’ve made you feel bad about yourself when I should have been setting limits in a way that allowed you to feel good about yourself and showed you the way forward in a more positive manner. I’m truly sorry about my participation in our Control Battle and how it hurt you. For my part, I will seek to be much more affirming of you, and will make my expectations and standards clear to you; healthy standards that you are completely capable of and will allow you to feel good about yourself.

When I receive a heartfelt and authentic apology and you acknowledge your need to address your behavioral issues, then we can talk about a plan, and I can reinstate your privileges. I don’t need you to be perfect, I need you to take responsibility and be learning and growing.

From here, you can look to a lot of resources for both you and your son healing from the Control Battle based relationship you’ve been in. You can get some therapy, your son would benefit from therapy, although his personality type often resists therapy. In that case, he would benefit more from you going together. The most important thing is that you stay positive and hold appropriately high standards for your son and offer privileges only when they are earned.

Stay positive and hold appropriately high standards for your teenager and offer privileges only when they are earned.Click To Tweet

So listeners, it’s always good to teach and role model apologies. But sometimes, the behavior warranting the apology is symptomatic of a much larger issue. Then, the apology is less the issue than identifying the problem and getting on a healing and growing path forward.

Thanks for tuning in today everyone and thank you to Marie for her question.

Would you like another useful resource for your teenager? If you’ve read my book, Ending the Parent-Teen Control Battle, I have a free gift for you! Simply click this link to go to the publisher website. Once you’re there, click Free Accessories where you’ll find Worksheets with a downloadable chapter titled, “For Teens Only.” One parent told me that after his daughter read that chapter, things in their family completely turned around!

Please remember, take care of yourselves; you need it, you deserve it, you’re worth it. Bye for now. 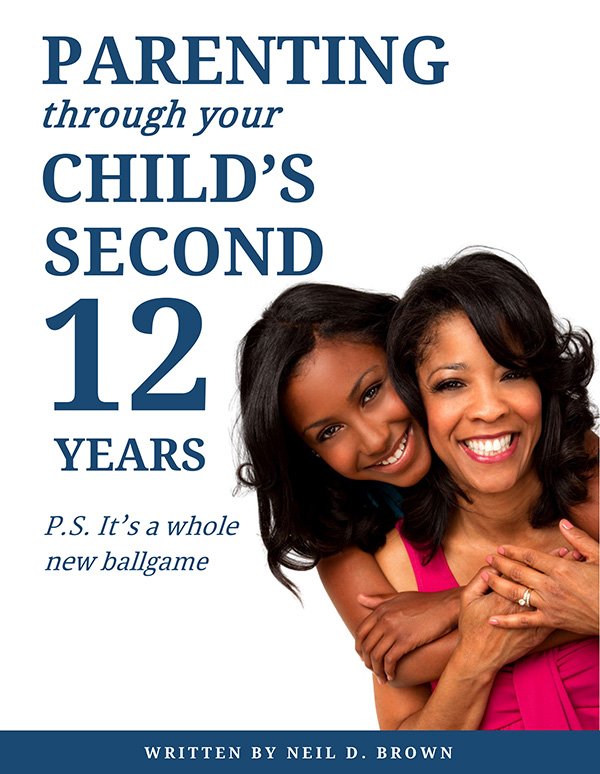