How To Make Your Teen Apologize

Does Making Your Teenager Apologize Do Any Good? 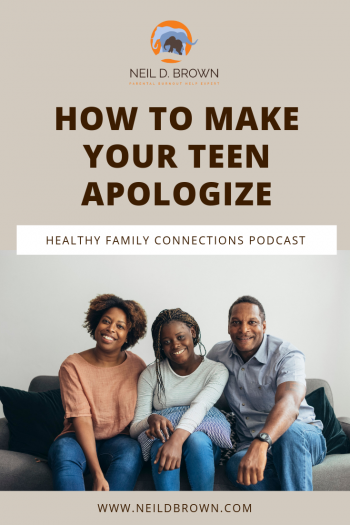 I was talking with the mom of a young teen the other day and she was telling me about an incident where she asked her son to apologize to his dad for inappropriate behavior.

The mom was wondering if she had done the right thing and she asked me several questions.

There are a couple of circumstances for which we generally offer apologies.

One is when we -- completely accidentally -- do something that hurts another, such as bump into someone, step on a foot, or take the wrong umbrella when leaving a party.

In these cases, we might not have done anything intentionally wrong, but caring that the other person was hurt by us matters to us and we offer an apology.

The other circumstance is when our behavior towards someone was below standard and violates our own values.

In these instances, we need to acknowledge that we did something wrong, and apologize in a manner that communicates that we regret the hurt, violation or injury we caused the other person or people.

It is important that we teach these values -- taking personal responsibility and apologizing -- to our children and teenagers.

When our kids are very young and they hurt someone, we simply tell them, "Say you’re sorry."

Then we let it go and we are happy to simply teach the behavior of taking responsibility and showing caring. Our kids, however, are too young to understand and internalize those values.

As kids get older -- and certainly when they are teenagers -- we want more than the demonstration of the behavior of apology. We want to see evidence of awareness and remorse for an inappropriate or hurtful behavior.

As kids get older, we want more than the act of the behavior of apology. We want awareness.Click To Tweet

We want to know that the teenager understands the value or values that were violated by their behavior, has genuine remorse for their behavior, and has every intention of not repeating the behavior.

We don’t want to shame them or have them feel bad about themselves, but we do want them to feel badly that they did something wrong.

We want them to learn and grow from their mistakes.

We want our teens to learn and grow from their mistakes.Click To Tweet

Adolescence is a time when kids are learning to function more independently. It's at this time we want them to learn and understand healthy values and behaviors without adults present.

And the only way any of us learn anything is by making plenty of mistakes that we then learn from. Parents still need to provide structure for that learning.

Let’s say you get a call from the parent of a schoolmate of your 14-year-old son, and you learn that your son posted hurtful things on her Facebook timeline.

In general your son does well and this seems way out of character.

You have a discussion with him and learn that this classmate of his said some hurtful things and spread lies. And with support and advice from some of his friends, your son retaliated with a hurtful Facebook post.

This provides an excellent teaching moment to support your son in learning about several areas:

Ideally, both sets of parents agree that both kids owe each other an apology and you set up a supervised opportunity for them to do it.

Even if the other parents were not amenable, you would still have your son realize the wrongfulness of his behavior and you would want him to offer a sincere apology.

After this is complete, and you see that your son is genuinely remorseful, you will want to monitor your son’s online activities closely until you are convinced that he understands and is committed to healthy social media etiquette.

This is pretty straight forward, and in a case such as this, the young teenager will learn and grow from the experience.

Let’s look at a different situation in which a teenager’s apologies seem empty, and the parents are having difficulty seeing any change or growth after a problem occurs.

Putting an End to Empty Apologies

Hunter, a 14-year-old teenager, has not only posted inappropriate content on his schoolmate’s Facebook timeline, but he has been discovered in the past going to inappropriate websites.

Hunter routinely talks disrespectfully to his mother when she is trying to get him to...

Hunter was always one to challenge limits, but up until recently, he would at least buckle down when he realized his parents were fed up.

He still follows the same pattern of compliance when he’s in trouble, but that only lasts until the next time he’s in trouble. Now that he’s a teenager, he’s under adult supervision far less than when he was a child so there are a lot more opportunities for him to exercise poor judgment.

When they came to their first counseling appointment, Hunter’s parents were beyond frustrated...

They were exhausted and plum out of ideas.

Dad: We’ve done everything we know for Hunter. We know he’s smart and we know he’s lovable, but it seems like he’s finding trouble every week.

Mom: This current episode is just the latest with Hunter. I can’t get him to cooperate at all. He replies with “in a minute” for everything I ask him to do and when I insist, after a barrage of backtalk, he does a mediocre job at best. Not close to his best effort.

Dad: He knows better than to post bad things on someone’s Facebook page. We’ve been over that and more. We’ve taken his phone and computer away and here we are again at first base. Nothing works with this kid.

Hunter: They’re on me all the time, always telling me what to do. They’re always angry with me and are never happy with anything I do. They get too upset about small things.

Hunter: Other kids have posted stuff on my Facebook page and I just say stuff back. If she was really hurt, I am sorry. I was only half-kidding... I’ll apologize. It’s no big deal.

It was clear to me that any apology in this case was just routine and that Hunter was not learning or growing from apologizing. He was not internalizing critical values or committing to changing his behavior.

And all this put him at risk for increasingly significant problems.

Is your teen truly committed to changing his behavior?Click To Tweet

There were many issues to sort through in this case...

But after several meetings -- including one with Hunter alone, his parents alone, and all three of them together -- we began to make progress.

What really turned things around was when mom and dad asked Hunter for a sincere apology for his actions and a commitment to make real changes in his life.

This is how that went:

Dad: Hunter, we know you’re a good kid. Yet things have not been going well for quite a while. You talk with us in a very disrespectful manner. We have to push to get you to do your work. You don’t seem to care about your school responsibilities, and you are making poor choices on a regular basis. Most important is the fact that this doesn’t seem to be changing regardless of what mom and I do to help you grow and learn.

What you posted on Janelle’s page was just plain wrong. It doesn’t matter what anyone else did. We’re not interested in anyone else. We’re interested in you and making sure that we support you in growing up to be the excellent person we know you can be. Not taking responsibility for your schoolwork and being disrespectful to us are all unacceptable and plain wrong.

Mom: Dad and I have not been holding you accountable to high enough standards and have spent too much time arguing and fighting with you. It seems all we’re doing is teaching you to argue and fight. And for that, we owe you an apology.

Hunter: You don’t owe me an apology, mom. I’m the one who does stuff wrong. I’ll change.

Mom: We’re glad to hear that and before you get any of the privileges you’ve come to expect, we are going to need you to demonstrate that.

Dad: That’s an important question for you to ask yourself, Hunter. You’ve apologized before and then went back to the same behaviors. So at this point, trust has been broken and you need to rebuild it.

Hunter: How long do I need to prove it?

Mom: It isn’t about how long. It’s about commitment, not words or consequences. You need to take some time and think about what you’re about. Are you a positive, sincere 14-year-old ready to make good personal choices? Or are you a 14-year-old acting like a 9-year-old, still needing his parents to be on him every minute?

Dad: Once again Hunter, we know you’re a wonderful kid and everyone loves you. You are charming and likable. And now you need to be more than that. Now, you need to grow your character. So yes, by all means, do apologize to Janelle, but mean it. And while you’re at it you can apologize to your mother for the disrespectful way you’ve been talking with her. And you need to apologize to yourself, for not doing your best and letting yourself down.

Mom: So take some time and think about all this. Your privileges will be there when you’re ready for them.

After a couple of counseling sessions with Hunter and a couple with his parents, Hunter was ready to make some sincere apologies and commitments.

Then, in a family therapy session, he read it to his parents. Part of what Hunter wrote was that he knew he would make mistakes, but when he did he would take responsibility and make a sincere effort to learn from them.

After witnessing a real change in Hunter’s attitude and behavior, his parents conditionally reinstated his privileges, and things went forward in a much smoother manner.

So, yes -- apologizing is important -- and we want to teach our kids and teenagers to take responsibility and learn and grow from their mistakes.

Have you recently had a breakthrough with your teen? Perhaps you feel you've reached an impasse?