Use Accountability to Create Teen Learning and Growing 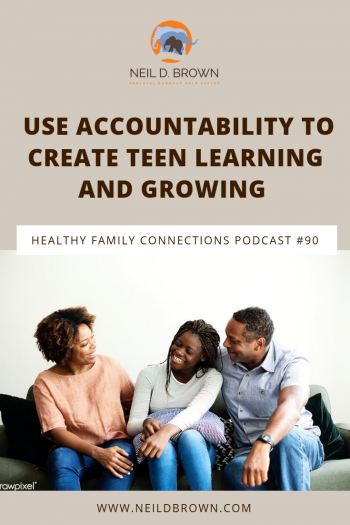 If you’ve revoked your teenager’s privileges, and they want another chance, how do you know when they’re ready? In today’s podcast, I talk about teaching accountability to your kids with an emphasis on finding a solution that helps them learn and grow.

I’m struggling in my quest to move from consequences to privileges.  My 16-year-old son is a pretty good kid.  He’s active in sports and does reasonably well in school.  He is very independent-minded and a good arguer.  He’s been grounded for the last two weeks because he didn’t come home at the agreed time of 12:00 AM.  When we texted him, he told us he was spending the night at his friend’s and didn’t come home till the next afternoon.  Here’s the dilemma. He wants to get off of grounding and we don’t trust him.  He’s done things like this before such as come home late clearly having smoked marijuana.  He argues that he can’t prove he’s trustworthy if we don’t give him a chance to prove himself.  He has a good point but we don’t feel confident.  How do we get out of this deadlock?

Thanks for your question, Janet. It’s a common question for many parents. How do you know when it’s time to offer privileges back after a breach?  Today, I’m going to clear this up and give parents a roadmap.

Let’s think about what we’re trying to do.

We want our children and teenagers to learn and grow from their successes and from their mistakes. Click To Tweet We need to create an environment that promotes that.  Now, the question is, when our children and teenagers make a mistake, how do we turn that into a learning experience?  How do we turn it into an experience where they learn that the behavior was a bad choice so they are more likely to make a better choice next time?  Some will say this sounds rather manipulative and behavioristic.  But as parents, we don’t want mechanical kids, we want supported, creative kids who believe in themselves, develop their potential and are good people and good citizens.

On the road to those lofty ideals, there have to be guardrails in place but with plenty of space to allow kids to express themselves, learn and grow.  We want to offer an environment that gives them lots of choices for personal growth and yet still has guardrails in place.  So let’s think of it this way, what are the best ways to have accountability in place for our children and teenagers?  After all, accountability exists in every job and every relationship our youth will have as adults. It’s a vital part of their development. They need to know and have respect for the concept of accountability.

How do we do that?  We can do it by using a generally positive tone, knowing and accepting that it’s part of the parental job and part of child and adolescent learning.  It's not the most fun part of their learning, but it's vital and important just the same.

We already know that the teen years is a journey towards young adulthood. Teens will necessarily want to do things more independently and when their decisions towards that end need correction, parents need to correct.  They are accountable to us, their parents, as they gain their independence.  Youth who become independent without parental support and structure generally do not fare well.

Parents, you do not need to tell your teenager that they are accountable to you, they know that although they may have found ways around it.

There are a couple of things that we have at our disposal for implementing and maintaining accountability:

Learning and Growing From Their Mistakes

Let me pose this question; if you are a middle or high school teacher, what is going to be the better way to teach a civics class? Stand in front of the room and lecture. Tell them what you want them to know, or tailor some questions and problems and break them into small groups to work on and then have them report back what they came up with?  Of course, it’s the latter.  When we respect that our kids can solve problems and figure things out, the lessons will be much more deeply learned.  When we try to teach them a lesson, particularly if they are in a control battle and are being oppositional, our efforts will simply feed the beast or continue the control battle adding to our frustration and burnout. It will delay the critical learning and growing they need.

Let’s say for instance, that your 14-year-old daughter has started getting a bit rude and uncooperative and today she calls you a bad name.  The easiest thing to do, to support learning and growing, is to ask her to go to her room and to let you know when she’s ready to talk about her behavior.  Then when she comes and tells you she’s ready, you simply ask her questions such as: What is wrong with the behavior you're demonstrating?  What’s driving it? What can you do to make sure it doesn’t keep happening?  She’ll most likely have all the right answers and probably some information about things you are doing that bother her, and that will provide a good opportunity to move your relationship forward. Both of you learn and grow. It's a good outcome without revoking privileges, and no further problems at least for the time being.  In this example, we put our 14 year-old in charge of coming up with a solution.

Now let’s apply this to your situation, Janet.  Your son is grounded and wants his privileges back.  The problem is that he is putting the responsibility for the solution on you with no indication that he’s done any learning or growing. He just said, “you give me a chance”.  Janet, your son has plenty of opportunities to demonstrate or prove to you that he can be trusted.  But the way things are structured in the relationship, parents are in charge of the privileges that your son gets and we want him to be in charge of that. That way he’ll earn what he gets rather than getting a privilege and then seeing if he was worthy of it. We want your son to work on and come up with “trust” solutions.  We want him to enjoy going out with friends, we just want to know that we can trust that he’ll respond to you when you call or text, will come home at the designated time, and will not use drugs or alcohol when he’s out.

The shifting of the responsibility for regaining a privilege from parent to teen is the critical element for ending a control battle and getting our teenagers back on the path to learning and growing.Click To Tweet

I call the technique, The Gap.  The Gap is the empty space between the question, “When do I get my privileges back?” that a teenager asks their parent, and the answer that the parent doesn’t have. The parent gives responsibility back to the teenager, “Only you know the answer to that question.  When you earn them back and demonstrate that you have learned what you need to learn from this, you will get them back.  I have no idea when that will be, only you do.”

So Janet, when your son says, “How can I prove that I’m trustworthy if you don’t give me back the privilege."
You say, “That’s an excellent question but only you have the answer.  I’d like you to go do some serious thinking about the many consequences of breaking trust, how you personally plan to build trustworthiness, and how you can demonstrate to us that you are ready to honor the trust and responsibility that goes along with the privileges you are granted.  Once you have put some thought into this and written some notes on these questions, let me know and we can discuss what you’ve come up with.”

That way Janet, you’ll have a formula for teaching your son in a way that opens the door to real learning and growing.  Now when he’s done that and you’ve had an important conversation and it appears your son is sincere and he’s doing things in a way that looks like he’s understanding his accountability and he’s demonstrating trust in some specific areas, such as following through on chores he’s committed to, you’ll offer him some limited privileges for him to demonstrate his trustworthiness.  He’ll have the opportunity to build on trust and responsibility from there.

So parents and folks working with teenagers, let’s respect their capabilities and invite them to use their capabilities.  When we do, they’ll surprise us with their wisdom and their willingness.  And that’s good for all of us.

Now that we’re into the holiday season, it’s more important than ever that you take care of yourselves.  You Need It, You Deserve It, You’re Worth It.  Bye for now.