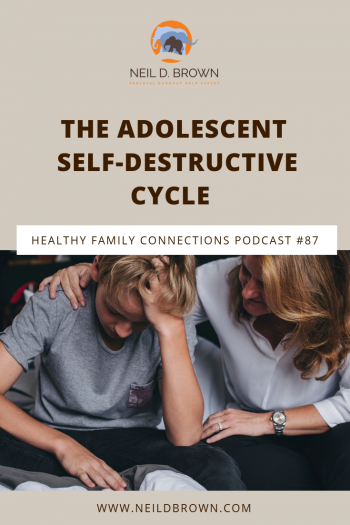 Think about this situation, your teenager is basically a good kid. He does well when he tries. He is personable and cooperative, but he continually screws up. Your kid may be experiencing the adolescent self-destructive cycle.

This week we’re answering a question from Loraine of Kansas City, MO.

My 16-year-old son is liked by everyone, and usually even us, his parents.  When we ask him to do something he cheerfully cooperates.  He always falls behind in school and then has to play catch-up at the end of the grading periods.  Instead of A’s and B’s, he gets A’s B’s C’s and D’s. He has ADHD and it was diagnosed in the 5th grade.  He’s on medication and sees a therapist once a week.  But here’s the problem.  About every couple of months, there’s some kind of a major issue.  He stole alcohol from a supermarket, sneaked into some kid’s house he and his friends were mad at and stole his pot, plagiarized on a report, and sneaked out at night to hang out with his friends.  We’ve had to hire an attorney to deal with some of these issues.  His therapist says he doesn’t have a drug and alcohol problem and wants to do well.  He reports that he truly feels badly when he screws up.  I try to stay supportive, but his father is fed up and is disgusted with him.  He thinks our son is just fooling everyone and is just a self-centered phony who knows how to get people to like him.  I’m beginning to feel like a fool supporting him only to have him screw up again.  What advise do you have for us?

Thanks Loraine. What you are describing is a confusing and frustrating situation for many parents and it can be difficult to know how to stop this infuriating pattern.  For starters, you have to be able to answer the question of what is really going on here.  Your son’s dad has reached the conclusion that he is a shyster who acts like a good kid, only to get what he wants.  You keep supporting him and then feel let down when he screws up. Is it ADHD? Is he a shyster who is fooling everyone? What’s going on?

The Stages of Moral Development

So let’s back up and take a look at things from a moral development perspective.  What is moral development you ask?  Let’s think about what morality is.  It’s the ability to see things from a point of view that is beyond one’s self-interest.  It's the ability to see things from the point of view of right and wrong and beyond that, the ability to realize that our values are not the same for everyone and every culture.  Often we hold values that compete with each other and then we have to apply judgment, for instance, loyalty, vs. honesty.  Then there is the ability to make decisions that are consistent with one’s values, which is not easy.  For instance, you can imagine a teenager saying, “I know that cheating is wrong, but if I don’t cheat I’ll fail and if I cheat, just this once, what’s the big deal?  After all, everyone always says I’m only cheating myself.”

How do we develop our values and our ability to live up to them?  When we are in the womb, we don’t know there is anything but us, we are the universe, and when we are birthed, it’s still the same. It’s all us, nothing else matters or exists.  Then after feeding on our mother’s milk, and our eyes open, we realize there is this other presence in the universe. Mother meets my needs, but it’s still all about us.  Then as we become more settled in the world we discover father and other people and our small universe grows a bit. But it is still all about us and whether our needs are getting met or not.

As we grow into toddlerhood, and then kindergarten, we begin to see there is an order to how our needs are met.  If we cooperate, we get the candy; if not we get the angry voice. There is an order to how the game is played.  If I want to watch TV, I have to finish my dinner.  And our understanding of the order of things- how we get what we want- grows as we get older. Our understanding gets more sophisticated.  In these early years, we grow our love for our family and maybe even our teacher or friends, but it doesn’t develop into empathy. We are not really understanding what others think and feel. However, we do learn how to behave in socially positive ways.

If we continue to get consistent support and have a secure attachment to our parents, we keep growing our confidence in ourselves and confidence that the world will respond positively when we behave positively.Click To Tweet After a while, we begin to realize a right and wrong way to behave. There are values that guide the rules. Hitting is wrong, saying our “pleases” and “thank you's” is right.  We have to be fair; but of course, it’s still all about us. “You’re not being fair,” the child protests as they identify the value that should allow them to get what they want.

Now healthy teenagers, particularly older teenagers, should have an internalized value system that works for them.  We should be able to hire a teenager who believes it is wrong to help themselves to money from the cash register.  A teenager should know they have to get to the game on time or they will be letting the team down and they should know that they need to complete their schoolwork.

Their sense of caring for others is much stronger than it was when they were a child, but their ability to truly empathize is still very early and underdeveloped.  In other words, as teens, they need to have developed values including respect for others, keeping their word, being honest, etc. However, adolescents are still very self-centered creatures.  They have a neurological tendency towards risk-taking and impulsivity.  Because they are in the early stages of value development, incomplete empathy development and a neurology built for impulsive high-risk behavior, it can lead to serious errors in judgment.  But they should want to do the right thing because it is the right thing and they should feel bad or guilty if they don’t.  Their conscience should bother them when they screw up.

An Adult's Capacity for Empathy and Respect

As adults, we continue to grow our capacity for empathy and our respect for others with values different from our own, and for our ability to act in ways that represent our values more than our self-interests.  On a small scale, think of someone you know who will do thoughtful things for others, without remuneration or even being noticed for their good work.  On a larger scale, we can think of Mother Theresa, Gandhi, or MLK as those who cared more about others than themselves.  In the horrendous camp fire there are unbelievable stories of sacrifice to save others, some stories will never be told, others will be held out as inspiration.

So Loraine, let’s get this discussion back to your situation.  As I describe these stages of moral development, development can be delayed or arrested at any stage.  Our prisons have a lot of folks whose moral development was arrested before they developed strongly internalized values.  There are others who are there with strong values but they either lost sight of those in one circumstance or another or they’re part of a subculture that doesn’t follow the law. They have their own underground law.

For teens, generally speaking, when their parents bring them to me in counseling, they are either pre-value development as your son’s dad thinks he is, or they do have an internalized value system, but for one reason or another, they are in a pattern of self-sabotage.

Loraine, your son is in the latter group.  How do I know this?  You provided several pieces of evidence. His therapist says he cares. He is generally a positive cooperative young man.  He wants to be liked.  And there are months between events, not days or hours.

So now we ask the question, why do kids with internalized values, self-sabotage? Generally for one reason, a poor self-image, a lack of confidence in their worthiness, a compromised self-esteem. Click To Tweet So without doing anything wrong, they are starting out with a black or gray cloud surrounding them.  They likely don’t show it, but they feel it.

Some more introspective and insightful teens will know that about themselves and may even see the process of self-sabotage.  But they also can’t sustain the effort involved in making consistent self-valuing choices.  They look to others for self-esteem and validation, rather than from self-investment and growing it themselves.  There is another less insightful or introspective group of teens with values, but they will see the problem as outside of themselves.  They will tend to blame the system, the teacher, the unfair rules, but this is all warding off the sense of unworthiness they feel.  They do feel bad and want validation from outside, but they set things up so that it won’t happen.  Your son’s willing participation in counseling indicates that he is most likely the introspective and insightful kind of youth.

Finding a Solution to the Self-Destructive Cycle

Loraine, your family has an active control battle that invites your son’s self-destructive cycle.  Because he has lost his father’s trust and faith in him, in fact his father now sees him in a negative light, and you are mighty frustrated and doubting your own continued support, your son doesn’t have a firm family platform to grow his own self-esteem from.  Here is how we can end this control battle, starve the control battle beast, and help your son out of his self-destructive cycle.

Essentially what we’re doing here is reversing the parenting approach.  We’ve gone from being down on him but not holding him accountable to high standards, to staying very positive with him and supporting him and holding him to very high standards.  This gives him a chance to repair his self-esteem and see himself in a positive light both through your eyes and his actions. With a positive identity, your 16-year-old son will live up to and continue to grow his values.

Thanks for tuning in today, and special thanks to Loraine for her question.  I’d like to remind everyone that my book Ending the Parent-Teen Control Battle is available in print, kindle, and audio, so there is a modality there for you. And if you’d like to use my book as a guide for a parenting education or support group, shoot me an email and I’ll be happy to visit your group via a remote meeting platform to meet folks and answer questions.

But for now please remember, take care of yourselves, you need it, you deserve it, you’re worth it.  Bye for now.