What do you do when your 15-year-old son’s probation officer is pretty liberal and supports low standards for your son?  We’ll talk about this and a whole lot more on this week’s podcast: My Son’s Probation Officer Is Making Things Worse.

My 15 yr old son is on probation for stealing alcohol from a supermarket. He was going down hill fast smoking marijuana, drinking alcohol and there were other drugs too.  He was never a great student but in his sophomore year he pretty much gave up on doing his work.

His high school transferred him to a “continuation school” which pretty much looks like kindergarten for teenagers to me.  They go to school for about 2 1/2 hours and have no homework.

I thought when he got caught, that there was going to be support for having him follow the rules.  He meets with his probation officer once a  month and as long as he’s going to school and doesn’t get rearrested, probation is happy with him.

They gave him a curfew of 10:00 PM, and when I tell him he needs to be home for dinner or any earlier, he says he doesn’t have to be.  He even says his probation officer doesn’t care if he smokes “a little weed” as long as he doesn’t drink or use other drugs.

Essentially I have a teenager who comes and goes as he likes, smokes marijuana, doesn’t do chores, doesn’t have a job, and the probation officer is happy, but I’m not.  Is there anything I can do, or do I just have to run a B & B for my teenager?

It’s an important one because it speaks directly to the healthy and unhealthy ways that professionals play their roles in their adolescent client’s lives.

Let’s start with why a probation officer might be involved.  That’s easy right, a teenager broke the law, in your son’s case, he was arrested for stealing.  Let’s look a little deeper here.  What we want for our teenagers is to use self-control to make healthy personal decisions. And to a large extent, teenagers can do that but not always, that’s why they have parents and families. 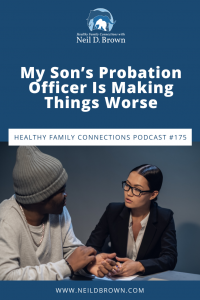 But kids won’t have parents to offer those limits forever, so the goal of parents setting limits beyond keeping them safe and healthy at the moment is to teach them to set healthy limits for themselves or move the locus of control from parents to youth.  That way, when the teenager arrives in their young adulthood, they will have developed self-control, healthy personal decision making, without the need for parental control.  Get it, it makes perfect sense right?

Now let’s look at a situation where youth like your son, has a probation officer in his life.  What that tells us is that not only was self-control not sufficient within the youth, parental authority was not sufficient or sufficiently effective to help a teenager control their behavior.

There could be a myriad of reasons for that but for whatever reason, youth behavior broke through the barrier of the parental safety zone, or parental limits and control.  What happens next is there is societal control and that takes the form of police, courts, and probation officers; and at the extremes, lock-up facilities.

We can call those folks, the Juvenile Justice System.

Now, just like the goal of parents should be to empower their teenagers to learn and grow their personal limit-setting skills or establish a healthy locus of control within themselves,

Probation officers should be empowering parents to enforce healthy limits for their teenagers and supporting teenagers in accepting their parent’s benevolent parental authority.Click To Tweet  Sure they should support healthy youth decision-making, but probation officers have caseloads of kids, and they won’t meet with them and monitor their development on a daily basis, the only people who can do that are the parents.

Probation officers can’t raise kids and shouldn’t try.  They shouldn’t be a kid’s best friend; supportive yes, caring about them, yes, but they should leave parenting to parents in fact empower parents. If probation officers make the rules for kids, that undermines parental rulemaking and parental authority.  So

Rather than telling a kid it’s okay to smoke some marijuana and be home by 10:00 PM, they should be saying, no drugs or alcohol period. If that’s going to be hard for you, we’ll get you to a substance abuse program to help. Click To Tweet Also, follow all school and parental rules, and no probationer including you is allowed out past 10:00 PM unless accompanied by a parent and must be home by their parent’s established curfew and otherwise cooperate with parental standards and expectations.  Family therapy should be mandated to support re-establishing healthy benevolent parental authority. Click To Tweet

Here’s a way to picture this:

Draw a circle at the bottom of a piece of paper.  Inside that circle write the word kid, teen, youth, whatever, but the circle represents a teenager.  Now draw an arch over that circle and label the arch, Parents.

So Eshe you’re thinking well this is all nice and theoretical but Neil, what the hell am I supposed to do with this?

That’s the right question to ask Eshe and here’s what you can do.

First of all, make it clear to your son that he’s accountable to you as well as to his probation officer.  And so just the same as with any kid who is not following parental guidelines he needs to be held accountable.  Does he have a phone?  Are there other privileges he has that he may be taking for granted?  Those may need to go away.  Actually, having time away from home is a privilege, so if he’s simply going out without permission, as he appears to be, then we go to step two, which is:

Have a conversation with his probation officer.  Keep in mind that your son’s interpretation of what he or she is saying may not be what the officer is saying at all, so don’t start by bawling them out.  They may be difficult to get a hold of, but keep trying and if they are so overloaded that they aren’t getting back to you, let the receptionist know it’s urgent or call the director of the probation department juvenile division.

Let the probation officer know that your son is interpreting their limits as:

Ask the probation officer to schedule a meeting or call with your son and you to make sure your son understands that he must follow Mom’s rules, and be respectful and cooperative if he wants to meet probation’s requirements and eventually graduate from probation.

Most probation officers enter the field because they want to help people who took a wrong turn in life, whether juvenile officers or adult officers and very often they switch assignments.  Many officers simply aren’t going to understand the vital importance of working with families, particularly with juveniles but with adult offenders as well and most won’t have received any training for working with families.  That’s why it’s so important Eshe that you act as your own advocate here and let the probation officer know exactly how best to help you help your son.

Eshe, I do believe that family counseling will benefit you with your son and my parenting course will help you find your empowered self and give your son that terrific mother he obviously needs.

So parents and professionals who work with parents, let’s always make sure that outside help is aligned with supporting a healthy family structure.  If you’re a professional providing individual counseling to a teenager, or a probation officer working with a youth offender, or even a family services social worker, where a parent is viewed as having been abusive, the goal and plan must include support for healthy benevolent parental authority.  Without it we’re expecting too much from teenagers while not giving them the family support and structure, they desperately need.

Thanks for tuning in today listener, I do hope that this year finds you safe and vaccinated, and in the meantime, let’s all mask up, socially distance and reduce all the risks we can, and do me and your loved ones all a favor:  take care of yourself.

Lord knows you need it, with all you do you certainly you deserve it, and you know something else, you’re worth it. Bye for now.