What do you do when you realize that you and your teenager are rubbing against each other and creating a metaphorical blister? We’ll talk about this and a whole lot more on this week’s podcast, Essential Steps To Prevent or Cure Destructive Teen Behavior.

I recently read an article by a writer for a blog site;

In this article, Mom realizes that her relationship with her daughter had the same chronic friction that caused a blister in her shoe.  She became extremely frustrated with her daughter’s behavior and started to push her on everything; her unkempt room, her schoolwork and her lack of awareness of her impact on others. Mom was really frustrated that her daughter wasn’t changing any of this. Instead, her daughter started lying whenever she was confronted and retreated to her room at every opportunity.

Once Mom realized that she and her daughter were rubbing against each other and creating a metaphorical “relationship blister”, she made a conscious decision to end her part of the rub.  Mom decided to bring a more positive tone in her communication, to not focus on every little thing her daughter was neglecting to do, to hold the line on the bigger things, and even go out of her way to do nice things for her daughter. In this story, after a few months the daughter came around and was far more positive and started actively seeking connection with her mother. It’s always inspiring to read about how parents, or for that matter kids, take the lead and create positive change. I just love it.

Unfortunately, many parents will look at this and say, this sounds too easy or, my kid is far worse than this, or our relationship isn’t a blister, it’s an infection, or I’ve tried these 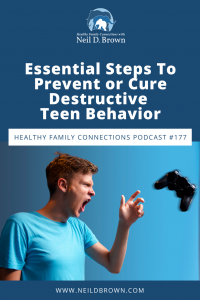 things and they didn’t work.  Yet there are elements here that, regardless of the specifics of any teenager’s behavior, can be an effective part of creating change. What Mom doesn’t talk about here is her daughter’s out-of-home functioning or serious risk-factors that her daughter presents; she only speaks to the relationship.  And self-destructive behavior and risk factors are often a primary part of parental concern; school failure, substance abuse, and cutting to name a few.

And while that’s true, parents effecting change and addressing problems with their kid’s development including how they’re managing school and out of home behavior will only be effective when parents are not participating in a Control Battle which is what the Mom who wrote this article had going on with her daughter.

Whether we’re talking about a metaphorical blister or an infection, we have to understand that these stressful negative relationships are in fact Control Battles and as such, they have momentum.  So Mom simply choosing to change her tone with her daughter can be harder than it sounds.  Control Battles have momentum meaning we all anticipate negatives from each other.

So realizing this is important because there will be a strong temptation on our part to respond the way we’re used to. Parents and kids both anticipate the negative, so they engage with the expectation that the other will be negative. We have to know that we are fighting against that negative anticipation and our natural response to it.  Also, we may be fighting against the only thing that currently works.  For instance, if I tell my daughter to put down her phone and do her homework, I can tell her a gazillion times but the only time she actually does it is when I yell and threaten to take her phone away.  That has become how things work so changing that means that things may not get done if I don’t yell and threaten.

So number one is knowing that change means changing a pattern that has developed and is now our normal; an unhealthy normal, but our normal and change means changing a pattern and creating a new normal.  The longer a pattern has been going on, the longer it will take to change and the longer a youth’s unhealthy personal behavior or unhealthy emotional state has been going on, the more challenging it will be to change.  Knowing what we’re up against is important.

In the story, Mom makes the changes and doesn’t talk to her daughter about the need for change.  Mom just changes her tone and avoids focusing on less consequential behaviors.  In a lot of situations, that’s excellent. In most situations coming my way as a therapist, there are critical youth behaviors that need to change.  School failure, drinking and smoking, cutting, refusing to get off of phones and devices, abuse of siblings are a few of the issues that parents come to counseling with and these behaviors need to be addressed directly.  But they need to be addressed in a way that is outside of the Control Battle.

That’s why I created The Talk. The Talk sets the stage for both parents and youth to understand that a change in behavior is required and it is the first step in ending the Control Battle.  The Talk is not something that occurs to us naturally. It’s more than good advice.  This tool incorporates powerful and sophisticated interpersonal change elements that were developed by early pioneers of family therapy.

It includes focusing heavily on a teenager’s strengths and good qualities, acknowledging the problems and the unsuccessful parental attempts to address them that made it worse. It includes parents taking responsibility for dealing with the problem poorly and apologizing, and parents not giving their kids enough credit for being able to change their behavior on their own, by their own volition, or giving them credit for being able to perform at a high level. It establishes clear parental standards and expectations, and it moves away from a model of parents giving consequences for teen behavior. Instead it establishes privileges as opportunities that kids earn by successfully addressing appropriately high standards and expectations.

When they earn them, they get them. When they don’t earn them, they don’t get them.Click To Tweet All this with a warm, humble, apologetic yet clear tone that is unlike the frustrated tone of the Control Battle. The parental attitude is one of faith in their youth that they will earn privileges, yet they will do it on their own time, not the parents.

Many of my podcasts have examples of me demonstrating various versions of the talk and it’s in the Ending The Parent-Teen Control Battle book and the course so you have many places to access it.

With the Control Battle a thing of the past, youth issues that may need additional resources such as medication, tutoring, and counseling, can be introduced, but now teens and parents are working in alignment to support teen happiness and success.

So parents and folks who work with teens and parents, a change in parenting approach that includes a positive tone, not engaging or being hooked by disrespectful teen behavior, letting go of less consequential negative behaviors and focusing on the more important ones and going out of your way to do nice things for your teenager is terrific, and virtually always a terrific idea.  And when a parent-teen relationship starts to strain, making these adjustments can do the trick, get things back on track and maybe even avert a disaster.  But when youth behavior includes serious risk factors and needs intervention, The Talk is the right way to directly address the need for change.

Thanks for tuning in today's listener and special thanks to the writing staff at Parenting Teens and Tweens and specifically, the author of this personal story. I do hope that this year finds you safe and vaccinated, and in the meantime, let’s all mask up, socially distance and reduce all the risks we can and do me and your loved ones all a favor:  take care of yourself.

You know you need it, with all you do you certainly you deserve it, and you know something else, you’re worth it. Bye for now.