What does it say about a family when a family member reaches out for emotional help and the answer is, sorry, it could reflect badly on the family?Click To Tweet We’ll talk about this and a whole lot more on this week’s podcast, A Royally Dysfunctional Family.

This week Meghan and Harry’s interview with Oprah made me stop and think, not so much about the Monarchy, which I could care more or less nothing about, or even racism, which I care deeply about.  What it made me think about is family dysfunction and what a stellar example of dysfunction the Royal family is offering us.

So let’s take a look at a couple of the elements of dysfunction the Royal family is displaying so we can learn from them.  I do have to offer some empathy for any family being so publicly exposed and the pressure that alone puts on their functionality, but the dysfunction is theirs so we have to acknowledge it and learn from it.

1. The flexibility of the system or the family’s ability to respond to changing needs and emerging situations. 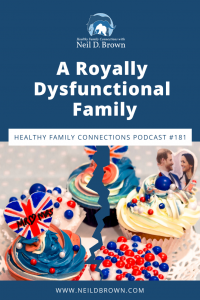 2. The ambiance of the system; or the ease or difficulty with which emotional information travels among the members.


These two characteristics influence each other but need to be thought of individually.  When working with a family, I’ll offer guidance in one direction or another and to the extent that the family can respond by accepting and incorporating that advice, is an indication of flexibility.  How does this characteristic look in a family?  Let’s say parents in a family are professionals and place a high value on academics and education yet one of their kids can’t get away from studying fast enough and wants to work on their car and build go karts.  Can this family pivot and celebrate this kid’s interests and support his or her involvement in career technical education where they can learn welding, machining and skills that support their interest and talent, or does the kid become the black sheep of the family for not succeeding academically?  Or a family where there isn’t a history of academic success and there’s lots of teasing and distracting.  Imagine in this family where a member wants others to quiet down so they can study. Are they mocked and teased for wanting something different, or are they supported in their needs?  To the extent that they are accommodated, that’s flexibility.

How about if you’re the second born, yet the first born is the one who is supposed to get all the attention, and as the second born, you’re told to not draw too much attention to yourself, even though you might be the more interesting sibling.

Families need to be flexible to the changing needs of its members and circumstances.Click To Tweet

Now the second element, the ambiance of the system.  Basically, that’s how family members are aware of each other’s needs and feelings, and respond to each other’s needs and feelings.  Think of this as a continuum with the left side of the scale being very aware and highly responsive even over responsive or too responsive. And on the far right is where people are much less aware or less responsive.  On the far right is a lack of support or even a lack of feeling included and belonging.  On the far left people feel included but maybe stereotyped and their individuality or autonomy not recognized or appreciated. Most families are somewhere in the middle and that’s where healthy lives.  On the far left we could call that enmeshed.  That’s unhealthy because it takes away autonomy and over responds and whether the response is positive or negative, it’s taking away the opportunity of someone to have their own private feelings.

Take for instance, a twelve year-old boy strikes out in a little league game and the parent can see he’s upset with himself.  Do they run over and give him a hug and tell him he did great but the umpire made a bad call?  Do they say, “Don’t feel bad, everyone strikes out?”  How about, “Why did you take a third strike, you know you have to protect the plate with two strikes?”  These would all be examples of parents over-responding to a kid’s feelings and not giving him or her a chance to have their feelings and process them, learn and grow from them.  How about if after the game the parent said something like, ‘That was a close game, how did you feel about it?”  And our 12 year old said, “It was alright.  It was fun making that catch but that pitcher was good and we all had a hard time hitting him.  My foul ball was almost fair so at least I hit it.”  That’s a way of engaging that allows this tweener to process their feelings and then share them with an interested family member.  This would be an example of a healthy place in the middle of the ambiance scale.

Now let’s contrast that with the parent who sat in the car and did something they were interested in and when the game was over and their child came to the car, commented that the game was long and dinner was going to be late.  This would be the disengaged side of the continuum, where the parent isn’t tuning in to what their kid might be feeling or even being interested in what they might be experiencing.

Now with our royally dysfunctional family, a family member reports that they are suffering emotionally and are having thoughts of taking their own life and need help and the response is, “Sorry, deal with it.”  Harry calls his father and his father refuses to take the call.  Where are these examples on the ambiance continuum, pretty extremely disengaged wouldn’t you say.  Meghan and Harry needed to leave the structure of the family and reach out to friends to reclaim any mental health and emotional safety.  I’m sure they’re reeling from the pain resulting from the lack of empathy, the lack of a caring response.

The Western World is waking up to the realities of racism and inequities in society - institutional racism.  Also, mental health and the need to acknowledge the prevalence of and need to respond to mental health issues is far more accepted in today’s world.  Sure, it used to be that mental health problems in a family were hush-hush, least anyone finds out.  Now it’s common to talk openly about one’s emotional state, one’s emotional issues and to get professional help for yourself or a family member. Somehow the inflexibility of the Royal Family has kept them from catching up to these societal changes and changing or God forbid, leading in these changes.  Rather than supporting Meghan when she was racially attacked in the media, or getting her the professional help she needed and requested, crickets, no response, no help, certainly no societal leadership.

These are two significant family features that families and family helpers need to consider for family health.  There isn’t one ideal way to be; yet a family needs to be flexible enough to respond to changing circumstances.  Some of those circumstances include kids simply getting older and ready to be more independent.  Perhaps a youth realizes they are in the LGBT world, or even they are sensitive and when someone raises their voice to them, it goes right to the heart of their nervous system and they want a parent to stop yelling so much.  Maybe a Mom who used to be at home and took care of most home functions needed to go back to work; did the other members of the family pick up those functions or leave them for her to do when she got home and on weekends.

On the emotional ambiance continuum, different families and different cultures have different tendencies and they can all work well towards the middle of the continuum.   When families are on one end or the other, either enmeshed or disengaged, it will interfere with mental health, and the social emotional development of children, teenagers and young adults.  I see adults in therapy who come from these families on the extremes and they still carry pain and feelings of unworthiness from their childhoods.

It’s not the function of the Healthy Family Connections Podcast to decide whether or not England should keep a monarchy.  But

If the British Royal Family wants to serve society in any way, they have a responsibility to model, healthy family functioning.Click To Tweet  And that must include listening and caring about the feelings and needs of family members and being flexible enough to change with the times.

Thanks for tuning in today’s episode, I do hope that this year finds you safe and vaccinated. Does it feel to you like there’s a light at the end of the tunnel?  I’m feeling hopeful so in the meantime, let’s all mask up, socially distance and take care of ourselves.  If we’re not good to us, we won’t have anything left for others and besides, you know you need it, with all you do you certainly deserve it, and you know something else, you’re worth it. Bye for now.